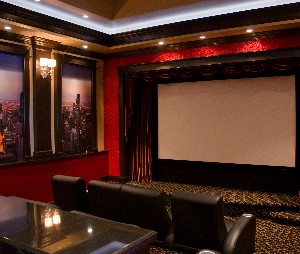 When designing a home theater, often the surrounding decorative elements are just as important to the overall experience as the electronic gear. In this 19-by-24-foot space, the owners lined the walls with specialty fabric paneling to evoke two very unique environments. Printed on one side of the room’s six panels are images of the Chicago skyline. Flip the panels over, and the scene changes to that of the Swiss Alps.

“Both of these areas hold sentimental value to the homeowners,” explains Jeff Galea of Boca Theater and Automation, who contacted Cinema Design GroupInternational (CDGi) in Boca Raton to create the reversible printed paneling. Galea says his company often incorporates CDGi’s CinemaScape panels in clients’ homes, but this is the first time to use panels that were printed on both the front and back sides.

According to Galea, the homeowners paid about 15 percent more for the double-sided prints than they would have for standard single-sided prints. While the change of scenery may be dramatic, there’s nothing elaborate about how the switch happens physically. “We had originally thought of motorizing the panels so they could be flipped electronically,” says Galea. “We ended up going very low-tech, though, to keep costs down.” The panels were designed to be removed easily from their frames and flipped manually.

The few minutes it takes the homeowners to change the theater environment from Chicago to Switzerland is a small sacrifice of time, given that it takes only seconds to fire up all the necessary electronics for a stellar show. An AMX control system (which governs the entire house) was programmed by Boca Home Theater to streamline the operation of everything A/V. For example, using an AMX 5200i touchpanel, the owners can select from a menu of various entertainment options, and the gear automatically sets up. “Gaming is huge in this household,” says Galea. In addition to the 143-inch Stewart Filmscreen screen in the theater, there are five flat-panel TVs in a neighboring game room: four 55-inch TVs which form a video wall, plus a 60-inch TV. On command from the AMX touchpanel, the family can fire up any of five PS3s and an Xbox 360. The same game or can be distributed to all seven displays (theater big screen plus the game room TVs) for multiplayer racing or combat. Or, the AMX matrix switcher can send a different game to each TV.

When the family isn’t gaming, there is plenty of other content to enjoy from a PC, Mac Mini, five high-def satellite receivers, to Mirage media servers, two Apple TVs and a Blu-ray player. In addition, video feeds from eight IC Realtime surveillance cameras and all the rest of the gear can be viewed on the big-screen—or any other screen in the house.

Nothing distracts from the view—be it provided by the big screen at the front or the acoustical panels on the sides—as all of the equipment is hidden away in specialty rack. Boca built a soffit to tuck away the DPI M-Vision projector and concealed seven speakers and two subwoofers from Bay Audio behind the acoustically transparent Stewart screen and wall paneling.
Electronic House Article