Home » In the News » Electronic House » Library Morphs into a Theater 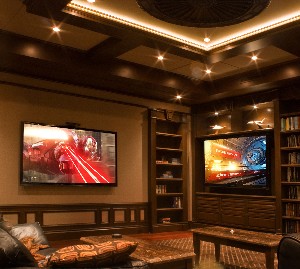 The well-stocked bookshelves might fool you into thinking this is a room where quiet reading and contemplation takes place … and it does. But there’s much, much more to this newly constructed space than meets the eye. Hidden behind wooden cabinetry at the front is a independently air conditioned area teeming with some of the best A/V equipment on the market, the type of gear that can turn the unassuming library into a world class home theater.

It all happens when the owners touch an icon displayed on a wireless AMX 9000i Modero touchpanel. This single touch engages the transformation, and in just a few seconds a 130-inch CinemaScope-formatted screen Stewart Filmscreen has descended from the ceiling into prime viewing position, a Digital Projection Titan Reference video projector has warmed up, a Merdian 7.2 surround-sound system has activated, and an impressive choice of components, which are hidden backstage, are primed for the owner’s selection.

Movies come mainly from a Kaleidescape 3U media server. The homeowners already owned a massive collection of Blu-ray discs and conventional DVDs—around 700 total—so the custom electronics professionals at Boca Theater and Automation, Boca Raton, Fla., used a companion Kaleidescape disc vault to load bit-for-bit copies of the original discs onto the 3U server, after which they organized the titles by genre, actor and other criteria. The owners spin 3D movies on a dedicated Blu-ray Disc player. Other video options include Apple TV, TiVo, Xbox 360 and two DirecTV DVRs.

Also available to view on the big screen, or on the room’s two-80-inch Sharp TVs are feeds from surveillance cameras and a dual-monitor PC. Explains Jeff Galea, CEO of Boca Theater, “The owner can view the Internet, conduct Skype calls, or access and view any computer program on one or both of the 80-inch displays or the Titan.”

The room lights and motorized Lutron blackout shades on the windows adjust themselves depending on the type of viewing the owners will be doing. Should the owner decide watch a movie on the big-screen, a command from the AMX touchpanel dims the lights and lower the shades so that the room is cinema-dark. Should he opt to read, play a video game, listen to music or relax, there are commands on the touchpanel that tell the lights and shades to set themselves accordingly.

As important as the electronic components are to the transformation, so is the room design. Through the implementation of various architectural and decorative elements,Cinema Design Group International (CDGi), Boca Raton, Fla., was able to create a stunning, functional multifaceted room, where the owner would feel just as comfortable conducting a conference call as he would watching a action-packed blockbuster. Parts of the design would also help downplay the appearance of the electronics to evoke a comfortable atmosphere. For example, the equipment room can only be accessed by opening a bookshelf that CDGi installed on a door hinge. A specially constructed soffit in the ceiling hides the huge and heavy Digital Projection video projection. As for the speakers, they’re tucked within the cabinetry and CDGi’s specially designed acoustical wall panels.
Electronic House Article