Home » In the News » Electronic House » Rise of the Jedi Theater 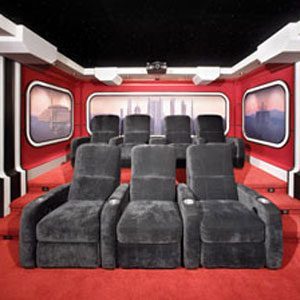 In “Star Wars III: Revenge of the Sith,” Chancellor Palpatine invites Jedi warrior Anakin Skywalker into his impressive office overlooking the capital Galactic City (aka Imperial City). It’s a pivotal moment in the film and the saga, for it is there that Palpatine invites the young Jedi to be his personal representative, setting in motion an inevitable clash. Nothing in the saga will ever the same.

Home theater owner Steve Simon had a pivotal moment as well, though his likely didn’t involve Jedi forces and dark sides. Simon wanted to convert part of his garage into a home theater, and he thought he’d decorate it with the Star Wars memorabilia he had collected over the years.

Simon hired his friend, Jorge Ocampo of Miami-based DreamSpace to be the electronics installer, and DreamSpace does a lot of work with CDGi (Cinema Design Group International), which makes acoustical panels and furnishings for home theaters. Once Simon realized that CDGi’s CinemaScape acoustic system could surround his home theater with customized dye sublimation printing, everything changed. His home theater would no longer be decorated with Star Wars memorabilia. It would be something right out of Star Wars itself.

What to use as inspiration didn’t take much thought. Simon loved the red colors of Palpatine’s majestic office, the futuristic sconces and above all, the backdrop of a detailed capital city. So there was the plan: Simon’s theater would be red, with identical sconces and ringed by windows showing the capital city. “I love the fact that there’s a futuristic city in the backdrop. That’s the place where you get to see most of the city,” Simon says.

DreamSpace and CDGi agreed, and from there, nothing was ever the same. CDGi knew that this would be a great way to show its CinemaScape technology in printing on acoustical fabric. Only there was a major challenge to fulfilling Simon’s request. The detail of the city from the movie couldn’t be copied on the large scale needed for Simon’s theater. The resolution just wasn’t good enough. So CDGi had to re-create the city in detail, using 3D rendering and then transferring that to a computer—several computers, in fact, to handle the huge files. And that would set this project back months.

“It became a labor of love on our part,” says Carey Schafer, vice president of engineering for CDGi. “Our 3D artists have done great work, but taking something to that degree was a totally different dynamic. We took some still shots from the movie and drew individual buildings based on the movie in a 3D world. Then we created the sky behind it. We had to build two supercomputers to crunch the image and get through it—and we used a shared array with eight more computers to go through it. We learned a lot [about] what goes into something like this.”

The theater has four “windows”: two on one side, one on the other and one in the back, each showing a portion of the city. Behind the faux windows, fabric walls and columns are acoustical materials such as absorptive panels near the front of the room and diffusive and reflective panels at the rear. Other techniques to prevent sound from escaping to the nearby neighbors include 6-inch staggered-stud walls on two sides that are filled with fiberglass insulation (two other walls are made of concrete blocks), isolation bumpers on the riser and stage to prevent vibration transfer, and bass traps in the soffit to absorb unnecessary booms.

The columns and sconces are mostly constructed of MDF board and finished with an automotive paint for a high sheen and depth, Schafer says.

Putting the equipment in the room was the work of Ocampo and DreamSpace. The installer chose a Marantz single-chip DLP 1080p projector and a 103-inch Vutec 16:9 screen with horizontal masking, accompanied by powerful Anthem processing and amplifiers and an array of B&W speakers and Velodyne subs.

Two of B&W’s remarkable 45-inch-high 802 speakers flank the screen behind black fabric, with a B&W 800-Series HTM2 center channel matched to them and two Velodyne DD-10 10-inch subs below. Atop the side columns near the seats and in the trapezoidal-shaped crowns are B&W DS8 dipole speakers that fire to the front and rear for better ambient sound effects. Two B&W SCMS speakers are located in the boxed structures on either side of the projector to complete the 7.1 system.

“Steve is very fond of B&W speakers, and the 802s are amazing,” says Ocampo. DreamSpace is using Anthem’s Statement D2 processor and Anthem’s P5 multichannel amp for five channels in the surround system, as well as the P2 amp for the two main front channels, each delivering 325 watts per channel. “The Anthems drive the speakers very nicely,” he adds. Just imagine a spacecraft chase or light saber duel with that kind of juice.

The Middle Atlantic rack is cleverly concealed behind a hidden door in the left wall (below). It’s all controlled by an RTI T3 touchpanel remote that also operates the room’s Lutron Grafik Eye lighting control system. The rack is vented by an Active Thermal Management system. Audio/video enthusiast Simon liked working on the project so much, he started his own Miami-based A/V installation company, Home Imagineers.

All in all, the year-and-a-half project took a bit longer that anticipated, but don’t all worthwhile sagas?
Electronic House Article