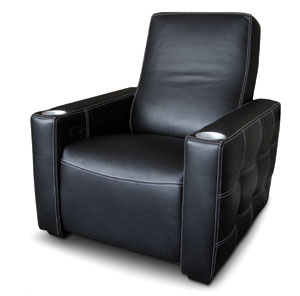 It was inevitable that we’d soon see green home theater furniture. Start with new line of totally green Royal home theater recliners from CDGi (Cinema Design Group International). According to Carey Schafer, vice president of engineering, the wood used in the framing is Baltic birch, there are no formaldehydes, the foam in the cushions contains no CFCs, and leather contains no chromium, which is often used in tanneries.

Not only does the Elmo Leather Tannery in Sweden operate a progressive environmental management system and has its own wastewater treatment facility, it produces supersoft high-grade leather. The tannery has even won environmental awards. “Leathers that don’t have chromium are very expensive,” Schafer says.

I bet you can tell where we’re going with this. Yup, these Royal line chairs from CDGi are expensive, Schafer says the green features raise the cost to about $1,500 more than other home theater chairs, bringing the prices up to $4,100 to $4,600 per chair. Gulp! But these babies are super soft and super green. If you have the green and want to be green, they’ll put both your backside and your conscience at ease. They come in three different widths and heights.

The company had just come out with the line of green Royal chairs when I saw them, so they hadn’t sold any yet, but Schafer said producing a green line just seems the right thing to do. He also said he thought the costs of green furniture such as this would come down in price as they become more popular.

In addition, Salamander’s packaging has been reduced to limit the use of EPS (expanded polystyrene foam, especially in super-dense packs for mounts, which Carrabba says gets more product on a container and in a truck, reducing carbon emissions and the company’s carbon footprint even more.

Salamander’s factory in Connecticut was also upgraded with energy-efficient fluorescent lighting and motion sensors, as well as high-efficiency motors, which have combined to reduce its energy consumption 25 percent to 30 percent.
Electronic House Article