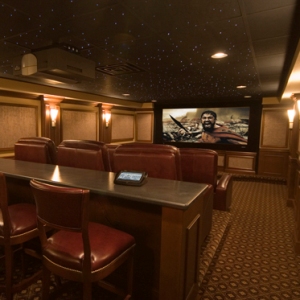 “The sound is amazingly full, and he can play it as loud as he wants,” says Elliott Wier of audio/video installation company Gramophone in Timonium, Md. “The McIntosh amp and B&W speakers will take it.”

The process of retrofitting this space for a home theater didn’t come without some nasty curveballs, however. The first challenge was accommodating Burnett’s 6-foot-4-inch frame in a theater with a 7½-foot ceiling. That doesn’t seem so bad until you consider that a video projector has to be mounted somewhere.

“We reverse-engineered the room,” says Wier. “We put the projector over the bar area so he wouldn’t hit his head on it, and then we determined the throw distance to the screen and built a false wall for it.”

Ah, but if a person’s height were the only challenge. Another hard-to-hit pitch was access to the space down a tight, winding stairway that prevented large objects to be brought into it. The CDGi chairs, the columns and acoustical panels all had to be built to go down the stairs in two pieces. The starfield was made from drop-ceiling iSky panels, and acoustical absorption panels are used all around.

Gramophone also had to relocate some bulkheads for plumbing and the like, which are hidden in arches leading to the theater. A 15-by-20-foot lobby was added later in the process.

In the theater, the center-channel B&W speaker and two 10-inch Velodyne subwoofers fire from behind the paneling below the screen, while two B&W left and right front-channel speakers sound from the sides of the screen. Side and rear B&W surround speakers are situated behind the wall fabric as well. A Crestron home control system with an 8.4-inch wireless touchpanel operates the works, including a Blu-ray player, satellite receiver and the Lutron Grafik Eye lighting system.

One of Burnett’s favorite things about his new off-season getaway? The Kaleidescape movie server that stores his family’s many kid movies. It makes this theater a winner.
Electronic House Article