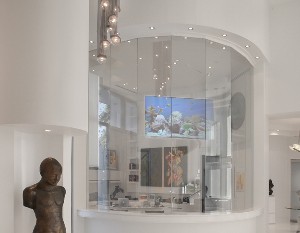 The owner of this home office has the best of both worlds: Seclusion and privacy when he’s hard at work, and the ability to interact with the rest of the family when he’s not. A huge expanse of glass opens up the office to the rest of the house, but in an instant the window changes from clear to translucent.

All it takes is a tap of a button, appropriately labeled “Fog Glass,” on aLutron keypad to excite the electronic particles inside the glass that make it opaque. “One command puts the space into stealth mode,” says Jeff Galea, CEO and president of custom electronics design and installation firm Boca Theater & Automation, Boca Raton, Fla.

When the glass is transparent anyone who passes by can clearly see the 75-inch diagonal screen that was designed by Boca Theater & Automation also to play a visual trick. Again, only when a button is pressed does the screen reveal itself, slowly descending from its home base in the ceiling. In this position, the Stewart Filmscreen model can do one of two things: masquerade as a virtual aquarium by displaying high-res images of ocean life; or function as a traditional TV by displaying movies from the owner’s huge media library that’s been stored on a Kaleidescape video server or streaming video from one of two Apple TV boxes.

There are also programs on six satellite receivers and a cable box available to watch. The owner reviews his options and makes his selection via few quick taps on the screen of an AMX touchpanel. The equipment, stowed out of sight in a remote closet, delivers the video via high-end cabling to a Panasonic projector that was mounted on a shelf on the back wall.

The video system didn’t always function exactly this way, though, says Galea. Originally, a screen had been suspended from the ceiling using invisible fishing line. “We wanted to give the impression that the TV was floating in mid-air,” Galea explains. While the installation was unique, the owners weren’t completely sold on the concept of having such a large screen visible at all times, and after a few months swapped the 3M Vikuti projection screen from Spyeglass for the motorized setup from Stewart Filmscreen. Two rectangular, in-ceiling speakers, the Z-Series audiophile-grade speakers from Sonance, complement the stylish, high-performance video.

The office isn’t the only place where video hides in this 10,000-square-foot home—the 60-inch TV in the master bedroom ascends on a lift buried 10 feet below to serve up images, also garnering an Electronic House Home of the Year Award honor.

Projecting a Better Image
Thanks to improvements in technology, you no longer need a pitch-black room to watch a movie on a projection system. The owners of this bright, modern, nearly all white library, where the screen would be used at all times of the day, were ideal candidates for a system that could stand up to the light. The Panasonic video projector (PT-FW300NTU) chosen by the custom electronics professionals at Boca Theater & Automation boasts 4,000 lumens of brightness and features a proprietary Daylight View 5 technology, which bumps up the brightness and contrast of images for daytime viewing. A built-in sensor detects the room brightness and adjusts the projector settings automatically. Paired with a Stewart Filmscreen projection screen made of an UltraMatte 200 material, the projected image maintains its brightness
Electronic House Article