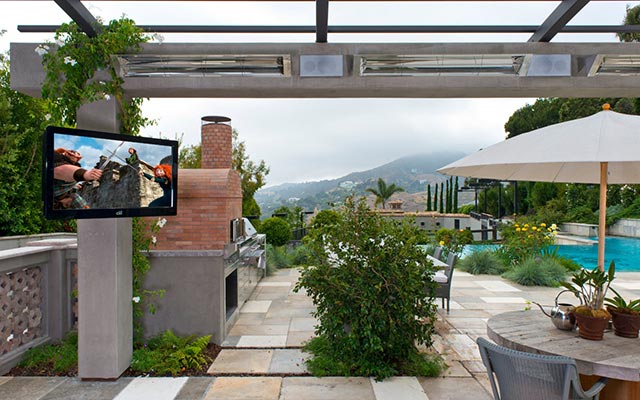 A Private Entertainment Palace in Malibu

About four years ago, Kyle Steele, president of Global Wave Integration (GWI), West Hills, Calif., was called to a construction site for a new 7,500-square-foot home. He was shown the concrete block basement where the homeowner wanted a theater installed and was told to essentially do whatever he thought was called for to make it awesome.

This is always a great way to start a fun project, he says, especially one that would grow into much more than just a home theater.

The homeowner told Steele to give her the works—the most advanced integrated system he could come up with. It had to be intuitive to use and gracefully integrated into the 100 percent custom-built home. What she got was an extensive network of audio and video with 45 audio zones, hidden speakers everywhere, motorized TVs and screens, 140 automated lighting loads and a Crestron home automation system bound together by a fiber-optic network.

Every room in this home seems to have some kind of hidden trick. In the master bathroom, for example, the owner can with the touch of a button switch an elegant outside-facing window into frosted privacy glass, all the while listening to music coming from in-ceiling Sonance speakers.

Outside, the patio and pool area includes more than 60 speakers, plus outdoor subwoofers. Even the private tennis court includes speakers from James Loudspeaker hidden in the court’s fence posts. While turning some kabobs in the outdoor kitchen, the cook can enjoy a Ciil outdoor TV.

When someone wants to take a dip in the pool, they don’t have to miss a beat of a favorite song, thanks to underwater speakers in the pool. After a swim the user can relax in the outdoor Jacuzzi. Activating the tub’s jets automatically turns the nearby speakers up a few notches to compensate for the jet noise.

Steele says little convenience features like this abound throughout the house, such as the lights connected to motion sensors and synched to an astronomical timeclock. “There are lots of little subtleties in the system working behind the scenes,” he says.

The basement isn’t the only room to get the custom theater treatment. The homeowner also wanted a big disappearing screen in the bedroom, but a flat-panel TV hidden in a cabinet just wasn’t going to cut it. The solution was to build a custom trap door in the ceiling to accommodate a drop-down 90-inch projection screen with integrated James Loudspeaker left/center/right channels. Designing this system was difficult because the trap door assembly needed not only to accommodate the screen, motor, speakers and wiring, but it also needed to perfectly match the Venetian plaster walls of the bedroom.

Opposite the screen, in a much smaller trap door, the projector lens is concealed. Both the screen door and projector door are controlled by the home’s Crestron system.
When not in use, the screen disappears, and the lovely window scenery takes over the room.

The 4,000-cubic-foot basement is the highlight of the home, which starts with a 42-inch Cybertouch TV that functions both as a TV and a giant touchpanel to operate the Crestron control system. The theater sports a 140-inch Screen Research projection screen, two rows of seats on risers, a small decorative stage, masking for the screen and tables for snacks at the back of the room.

To hide the big 10,000-lumen Digital Projection Inc. Titan Reference projector, GWI built a soffit at the back of the room, but this came with a slight problem. The rear wall was cinder block, which would make it impossible for the projector to be serviced from the other side. As one of the many custom engineering projects in this home, Cinema Design Group International (CDGi) designed an automated sled that would slide the projector out of the soffit for easier access.

For audio, Steele went with 12 James Loudspeaker speakers built into THX-specified enclosures. Five subwoofers are also spaced around the room, but none of them are visible to guests.

The theater was professionally treated for top-notch acoustical performance with the addition of panels designed by CDGi,  and it received a full audio calibration using Crestron’s Audyssey calibration kit and Procise calibration software.

A stand for the 15-inch Crestron touchpanel was custom built to fit one of the seats. From the touchpanel, users can preview any video input (including an Apple TV, Oppo Blu-ray player and DirecTV receiver) and simply tap the screen to make content from the chosen component pop up on the big theater screen. Some clever programming ensures that no one misses a moment of a film, even if a guest needs to take a powder room break. When the theater is in use and someone enters the nearby powder room, a Séura mirror TV in the room automatically turns on and switches to the theater source.

Also in the basement is a wine room with an eSommelier system that automatically monitors the inventory of the owner’s wine collection.

Steele says the key to pulling off a system as large and complex as this one was being proactive to minimize surprises along the way. For example, he knew they might run into problems heating the thick stone slabs with a radiant-floor heating system, so he had the stone slabs laser calibrated several times to ensure the system would work as intended.
Electronic House Article